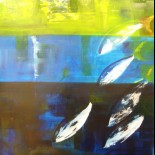 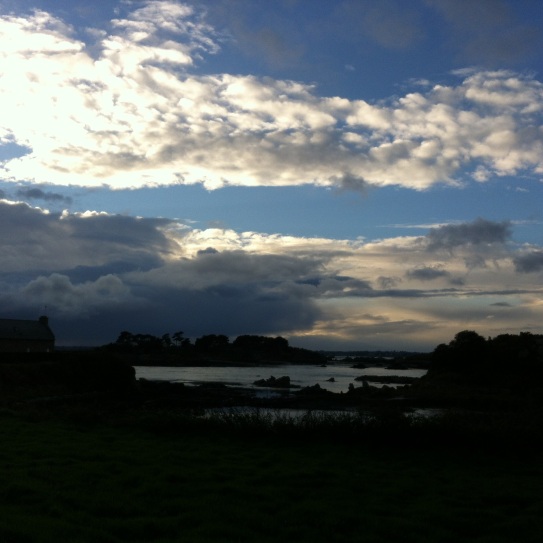 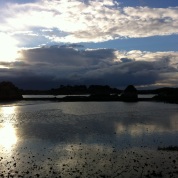 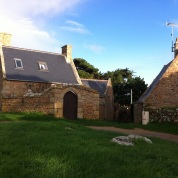 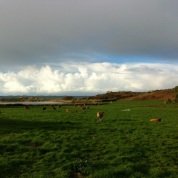 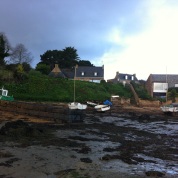 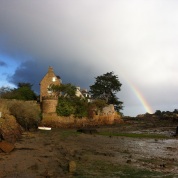 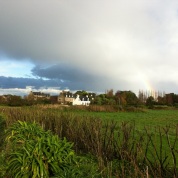 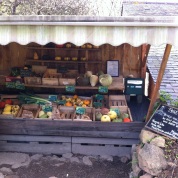 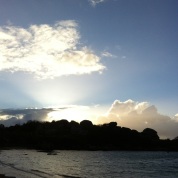 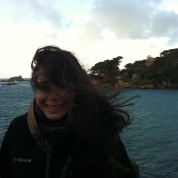 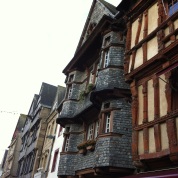 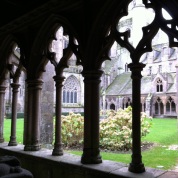 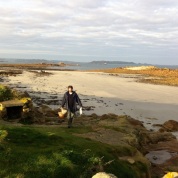 I was lucky enough to have some time off this January while waiting for the new kitchen to be ready at the restaurant I’m working at. So, Julian and I went to stay at his mothers and step-fathers house in Trévou-Tréguignec, Bretagne (Brittany, France). We had been there before, last fall, and it was so nice to get away from the noise and crowds of Paris. I just wanted to have some time with my husband and work on getting things done for our big wedding in the USA this spring.

Bretagne is full of cute little villages, rocky shorelines and big beautiful skies. On the way from Paris we made a stop in Normandy at Omaha Beach and the Normandy American cemetary.   I had promised my grandfather I would visit years ago before he died as he was one of those who fought in WWII and landed on Omaha Beach. There is an amazing museum you can see in Caen which does take hours to even just breeze through. We didn’t even visit the last part because time wouldn’t allow, but you could spend all day. The drive to the beach is another 15-20 minutes into the countryside which opens up to the memorial statue. There isn’t much to see besides the shoreline, but I am glad we went there before going to the cemetery because it really gave a sense of what these young men encountered.  That was where I felt the intensity of the loss of life, seeing the small white crosses covering the brilliant green grass next to more rugged, rocky beaches.

We decided to spend the night in Saint Malo, which is probably the most precious fortified city I have seen in the north of France thus far. It isn’t big by any means, but well kept with nice shops, great little finds for eating and a strong sailing community. The restaurant we had dinner at we had found on LeFooding. Autour du Beurre is a little wine bar with a short but sweet menu and choice wines – owned by Jean-Yves Bordier. The best part of the meal was getting a sampler of the bordier butters made in house, simply amazing. Apparently the chef is around 25 years old and had worked at some top restaurants in Paris, which explained the basse temp cooked lamb. It’s not often you find such cooking methods in smaller towns, especially at a place with such well priced dishes. We had starters, main, dessert, chesse, wine and the butter for around 110Euro total. Great service as well.

Bretagne is known for its beurre sale (salted butter caramel), cidre (alcoholic apple cider), seafood, crepes and galettes (savory crepes). I don’t know if it’s because I’m American, but I am still learning to appreciate galettes. It could also be that I really don’t care for the emmenthal cheese (a lot like Swiss cheese in the USA) generally used in galettes. We did visit one creperie in Saint Malo at the recommendation of a friend, it was good and well priced – Creperie la Brigantine. I’ve preferred the crepes in Paris more, but they were also almost double the price.

We left that afternoon for Trévou-Tréguignec to spend the rest of our week exploring the local towns and ports.  My favorite village was Brehat, which is actually two small islands only reachable by ferry. These islands are considered a microclimate, and thus are some of the few areas able to grow Mediterranean succulents and flowers in the North nearly year round. There are no cars allowed which only adds to the charm of centuries old stone homes and farms. While there was little open in the winter months, it was fine to spend the day walking around and gasping at each turn how beautiful it was. We were rather lucky that the little bit of rain we had while on the island created a magnificent rainbow for the first part of the day. We passed an unmanned vegetable stand with local gourds and apple juice with a mailbox to put your money in (the honor system, how amazing!). Julien accidentally discovered the baby cows (which he called ‘veal’) were kept in the pasture by electrified wire fences. If you are in the area don’t miss the chance to really get away from it all and walk around in serenity.

You could turn into a cidre-holic drinking the wonderful cidre that the area is famous for, Prat-Roug. If you get a chance, visit this charming cidrerie. It is by far some of the best cidre I have ever had, and well priced. A case of 6 bottles will set you back around 17Euro. The hours are Tuesday-Saturday 17h00-19h30, worth the wait and drive.

Sometimes I can enjoy Paris.  However, in the last six months I’d have to say the most enjoyable memories were from Bretagne. The dark skies, so open and so clear to showcase the sparkle of all the stars brought back childhood memories of laying in the dewy Virginia grass and gazing into the evening sky filled with not only stars, but hundreds of lightning bugs. These are the kind of memories I hope to share with my children someday, which might make me more of a country girl then a city girl at heart.

The end of the trip ended with a lesson in spare tires! 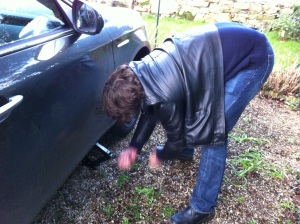 5 comments on “Memories from Bretagne, France”